the blog of Sentry Law

What is migration law, really? An inadequate exploration of a complex question.

This is going to be step sideways from my typical articles discussing the practicalities of migration law in Australia. Instead, I’m going to attempt to answer a very broad and theoretical question—what is migration law, really? I feel that if I am going to hold myself out as focusing in a particular area of law, I should be able to give a relatively logical and comprehensive answer to what exactly that area of law is.

If that discussion doesn’t sound like your cup of tea, I’d encourage you to read some of my other posts, which deal with more practical issues, such as the consequences of visa cancellation or whether decision-makers considering whether to cancel a visa are bound by the facts found by a criminal court.

What is migration law, really? A preliminary note.

Not even one sentence into my attempt to answer this question I was tempted to abort. Smarter, more capable people would probably have considered the scope of their enquiry before starting their attempt at an answer. People not quite as on-the-ball, but still smarter and more capable than me, might have begun their attempt in haste, but quietly surrendered—not having communicated their inevitably doomed attempt to anyone, they would have saved themselves from the judgement and embarrassment of posting a half-baked treatise on issues already considered at length by many academics and more accomplished lawyers.

But, on the flip side, every day I speak to people—not lawyers—who face the prospect of their lives being turned upside down because of an administrative decision made by a person who, by accident of history, has been given the power to refuse or cancel their visa (or the visa of a loved one). In most cases I attempt to provide practicals solutions to their circumstances, but in many there are no solutions—just the inevitability of familial and emotional dislocation that will last, literally without recourse, for the balance of their lives. In that, latter case, I have been asked on more than a few occasions, in one way or another, ‘How can anyone have the power to do this?’ Handing these people copies of public and administrative law textbooks, or papers on the topic delivered to rooms of lawyers by Senior Counsel, would not give them any greater insight into how what has occurred has come to be.

Every other week speak with other lawyers who practice in other areas of the law. When I describe the types of cases I deal with they are often shocked by how arbitrary the processes and outcomes are and, on one memorable occasion, asserted that my understanding of the law and what had happened to my clients must be wrong. Even for these trained and capable lawyers, the vagaries of migration law are foreign.

So against that background, please read the following article with a sense of mercy and an acknowledgement of my humility. I certainly don’t want anyone to think that I think that I have anything insightful to add to what has already been written.

What is migration law, really? The simple version.

When a lawyer, or a law firm, describes themselves as a migration lawyer, what does that mean? In Australia, it probably means that they provide advice and assistance in relation to issues that arise under the Migration Act 1958, a piece of legislation originally passed by Commonwealth Parliament in 1958. However, such significant amendments have been made to the Act since 1958 that it would be entirely unrecognisable to the members of parliament who voted on the first version.

The overarching purpose of the Migration Act is to ‘regulate, in the national interest, the coming into, and presence in, Australia of non-citizens.’ Commonwealth Parliament can make the rules around if and when non-citizens can enter into (and remain in) Australia because s 51(xix) of the Constitution gives it the power to make laws in relation to ‘aliens’ (we’ll put to one side the emerging issue that the terms ‘non-citizen’ and ‘alien’ are not interchangeable).

The Migration Act is a relatively complex piece of legislation, but at its heart it gives the Minister responsible for its administration (currently, the impractically entitled Minister for Immigration, Citizenship, Multicultural Affairs and Migrant Services) the power to grant and refuse visas authorising non-citizens to enter into and remain in Australia, and cancel visas already held by non-citizens. In the great majority of cases, these powers are not exercised by the Minister personally, but by employees of the Commonwealth government on whom the Minister has delegated those powers.

The Migration Act does not give the Minister (or the Minister’s delegates) an unbridled power to decide who comes into, and remains in, Australia. Visas can only be granted, refused or cancelled if certain circumstances are met. Those circumstances are set out in the Migration Act and the Migration Regulations 1994. The rules which govern whether a visa can be granted, refused or cancelled could be described as ‘migration law,’

What is migration law, really? The more systematic answer.

Simple and elegant as the above answer is, it doesn’t give anything more than a superficial answer to the question posed to me by the mother of a young man facing the prospect of cancellation, removal and lifelong exclusion from Australia—”How can anyone have the power to do this to my family?” I think that getting to a more meaningful answer requires a deep dive into the law, and what are described as ‘public’ and ‘administrative’ law specifically.

What is ‘public law’

Migration law falls within the broader area of public law. In contrast with private law, which regulates the remedies and causes of action available between private entities or individuals (e.g. the law of contracts, of civil wrongs, divorce and property settlement, and most wills and estates), public law generally relates to the exercise of government powers.

Before we go any further, I am going to give a very brief and wholly inadequate description of the three arms of government in Australia:

When I say the exercise of ‘government’ powers, I mean:

Historically, at least in the Anglo-Celtic tradition, all three types of powers were held by the Crown (the King or Queen). That is, the Crown made the laws, enforced the laws and settled disputes amongst among their subjects. The power of the Crown was unconstrained and unrestrained because, having been put into the position of power by the Divine Creator, the Crown could not be constrained by other persons (being mere mortals).

While I was still studying at uni, I worked in an administrative role for a community legal centre. Not infrequently, the centre’s contact email address would be randomly CC’d on emails from persons to Government Departments claiming that they would not comply with the requests made of them because the Government did not have the lawful power to make the request. The emails would inevitably cite the Magna Carta as authority for their position.

Admittedly, my understanding of the Magna Carta is limited. Made in 1215, it recognised certain rights of the nobility which could not be infringed by the Crown. It certainly did not enshrine ‘the rule of law’ as it is currently understood, but it was the first time (or at least one of the first times) that the Crown admitted that its power was not totally unconstrained. Events since then, including the Glorious Revolution of 1688, have further constrained the ways in which governments in the Anglo-Celtic tradition can exercise there powers.

It might be asked why distinct types of laws would need to protect life, liberty and property from arbitrary and capricious infringements of what have come to be called ‘rights’ by other private citizens on the one hand the government on the other. I think the answer lies in the government’s monopoly on the use of coercive force—that is, the power to detain or deprive a person of a benefit. So, if we are talking about a power to detain, then public law asks:

I am going to risk looking like an idiot among my peers, because I am going to suggest that the first question—‘Did parliament have the power to make this law?’—is no longer simply a question of constitutional law. That is because, with the adoption of, and advocation for, Charters of Rights in Australia, I think the idea of public law as it relates to acts of the legislature (that is, passing legislation) needs to be expanded. If a state (or the Commonwealth) adopts a Charter of Rights, then the relevant question Is not just ‘does Parliament have the power to make this law,’ but also, ‘does this law offend the Charter and, if so, what should be done?’

In the context of migration law, Parliament has an almost unfettered power to make laws in respect of ‘aliens.’ The meaningful limits of this kind of migration law are set by the Australian public who, through their electoral decisions, shape government policy and the content of the laws passed by Parliament.

If what I have termed ‘Legislative Law’ relates to Parliament’s power to pass certain legislation, then, at least historically, ‘Administrative Law’ was concerned with whether actions and decisions of the Executive are lawful. The principle that the Executive should at all times act in accordance with the law is uncontroversial and fundamental to our law (as Brennan J put it in in A v Hayden (1984) 156 CLR 532 at 580). That principle is one aspect of the rule of law implicitly recognised by the Constitution (as acknowledged by Dixon J in Australian Communist Party v Commonwealth (1951) 83 CLR 1 at 193). Section 75(v) of the Constitution empowers the High Court to make orders reviewing and constraining the acts of Commonwealth Officers, which effectively give the Court the jurisdiction to enforce the principle cited by Brennan J in A v Hayden. This kind of traditional administrative law is described as ‘Judicial Review’ because you have apply to the Courts to review the lawfulness of an Executive action.

While administrative law was historically confined to Judicial Review, over the last half-century, a different form of administrative law has developed—’Merits Review.’ Merits Review is concerned not with whether a decision was lawful, but whether it was ‘preferable.’ The reason why applications for judicial review to the Federal Circuit Court and Federal Court are so rarely successful, especially in the migration context, is because the Courts are not concerned with whether the decision they are reviewing was ‘preferable’ in all the circumstances, only whether it was lawful. And, a decision does not need to be preferable in order to be lawful. Internal review and reviews conducted by the Administrative Appeals Tribunal do not ask the question, was the decision under review lawful, they ask the question—what is the preferable decision in all the circumstances. That is, the review the merits, not the lawfulness, of the decision. A merits review decision itself can always be the subject of judicial review. 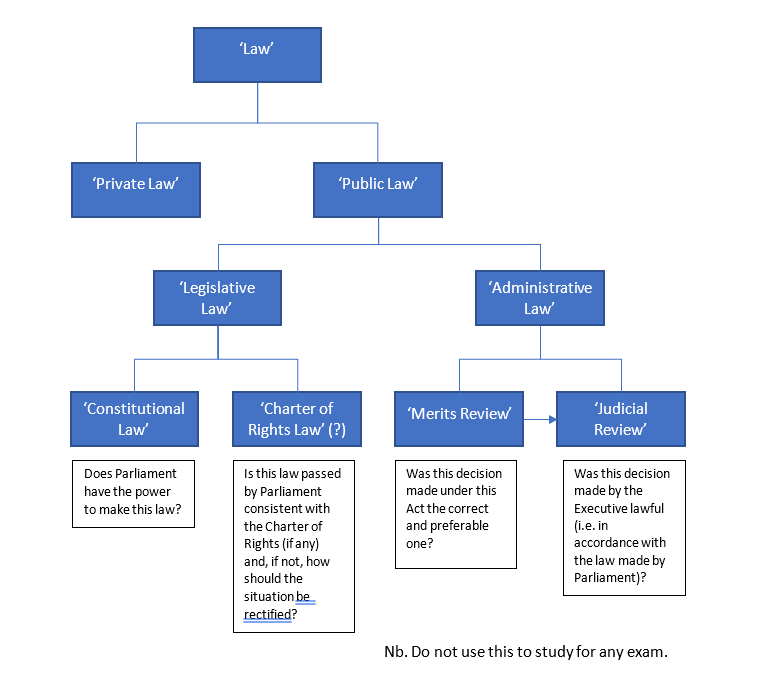 What is migration law, really? A conclusion.

So, what is migration law? Well, in one sense, in circumstances where Parliament has a near unfettered power to make laws with respect to aliens, migration law is whether Parliament acting on behalf of the Australian public, decides it should be. Migration lawyers have very little input into that process.

In another sense, migration law is about ensuring that, within the system of law established by Parliament:

In a practical sense, I think this is achieved through three facets of practice:

I look forward to hearing your thoughts below!

This site uses Akismet to reduce spam. Learn how your comment data is processed.

Submit your online enquiry and we will get back to you within one business day.